Anyone who has been to China’s countryside from end February through early April will be impressed by the rape seed flowers, which are everywhere. They make you feel that just overnight, after a chilly shower rain, their bright yellow flowers suddenly all popped up; In another two to three days they wildly dominated the fields and banks. From a train, car, bicycle or just walking, it seems you cannot avoid the immense sea of bright yellow.

Many years ago, my elder brother worked in a small private school located in a suburb of Shanghai. One Spring morning I went to visit him. After multiple changes of transportation, finally I met my brother at a little bus station. It was a very quiet small town, with clean and empty streets. We did some shopping in a tiny grocery store, then my brother led me to where he was living.

When he unlocked the gate, I was totally amazed by what I saw: Behind the gate was a huge yard, where a myriad of rape seed flowers were in their peak blooming time. The stalks were as high as five to six feet; the powerful and aggressive yellow colors dazzled my eyes so that I almost couldn’t move. The scent of the flowers in the sun was concentrated—so strong yet pleasant--that my nose could smell nothing else. They overwhelmed me. When my eyes were a little bit more used to what I had seen, I looked around and found a little three storied house floating on top of the yellow flower ocean: It looked so dreamy, as if it were a paradise. That was the most impressive scene of rape seed flowers I had ever seen.

That evening, after a whole afternoon basking in the sun, plus a good home cooked dinner, I rested in a spare room and turned off the light. It was a little bit chilly in the evening, but the scent of the flowers became even stronger than at daytime. It could be that the cooler air filtered the dust, and the silence made my nose more sensitive. I opened the door and leaned on the rail of the balcony. The sky was a mixed turquoise-blue color. The flowers were standing silently but noisily in the dark. Even though there was no sound from them, I could sense the outpouring of their energy. What a dustless night! How beautiful life was! Standing in that little balcony, in the Spring chill, I was the only audience. And behind me, the bed was hidden in a deeper darkness, and the lacquered surface of a desk was glistening dimly. I had a distant dream, but I also had a warm place that would receive me. I was so grateful. 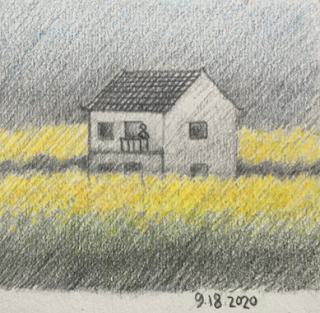 I have forgotten if there was a moon or not that night, but, accompanied by those vigorous rape seed flowers, I had a wonderful night, and a fragrant dream.

My brother left that school the next year, and since then I have never gone back. The memory of that day still lingers with me—Is it because of those willful flowers? Or because of that sunny day and that lonely town? Or just because of the time I spent with my brother? But surely my memory wouldn’t be complete if lacked any one of them. 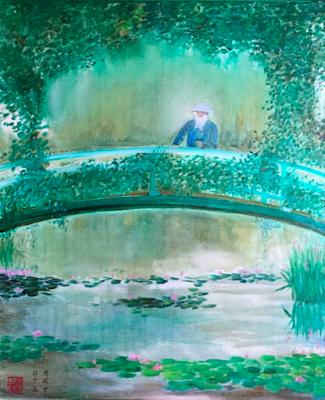