He arrived at his house in the evening. He saw the candlelight coming through the window: “There is no doubt that they still should be here! Where else can they go?” He tapped the gate with his hand heavily and called: “ Open the door! I am back!” Later he saw the light draw closer to the gate, and it was opened. He saw his wife’s face appear in the flittering candlelight.

She seemed unsurprised to see him. He was curious: “Don’t you want to see me? How is my mother?” Before he got the answers, he entered the gate. The yard was darkened by the night, but the room was visible: A hand-operated wood loom was standing at the corner, some fabric was on it, half-finished. Everything still looked the same as it had ten years ago when he left; he felt relieved. He turned to his wife and asked: “Where’s mother?” Her face saddened: “Our mother died five years ago. I buried her in this yard.” He scolded her: “Why didn’t you take good care of my mother?” The wife placed the candle on a small square table, she answered slowly: “You left us without a penny at home. Mother was sick then and you knew it. Since you left, I have had to weave fabric day and night to trade for some food. I barely could feed our mother and myself. She died half from starvation and half from illness. She missed you very much, but we received no word from you. She died with her eyes open.”

He felt sorry to hear that. He took off his outer jacket and sat down on a floor cushion.” You can’t bury my mother in the yard, it is indecent. We will have to bury her somewhere else. But right now, I am very hungry after having walked a long distance. Go to get some hot tea and prepare some food for me!” The wife left obediently.

His tea and dinner soon were brought in silently, and even included one bottle of wine. He was overjoyed: “Wow, I haven’t drunk your home-made wine for ten years! And the food isn’t that terrible either. You just have complained that my mother was starved to death, so where did this food come from?” The wife started to weep. He didn’t care at all and ate heartily. The wine had been stored for quite a long time, and he felt tipsy. He examined his weeping wife: She was wearing the same dark plain gown as she used to wear at home ten years ago, but its color had faded a lot since; her hair became thinner and she looked much older. He talked to her: “Remove your sleeves, let your husband take a good look at you. Why, you look so haggard and worn! I happened to pass the town today and I thought it mightn’t be a bad idea to come to see you. Can’t you be more cheerful?” After saying this, he laughed arrogantly: “Do you know that I am a rich man now? I have never dreamt that one day I could be such a man: Tons of money, power. By the way, I have remarried, and she is a real beauty. Yes, I could have come here five years ago then my mother mightn’t die, however I didn’t want people to know my real family. You can follow me as a maid if you want a better life, however, you mustn't let people know that you were my wife! And you must treat my current wife as your master!”

The wife stopped her weeping. She stared at her husband the way one would look at a stranger: “How could you do that! Even though I am a poor woman, I am the wife your parents chose for you; I am your legal first wife; only I will be acknowledged by our ancestors! You abandoned your ill mother and your wife, you let us struggle and die! How many nights I waited in the dark and wished you could come back, but you failed me every time. All the disappointments grew along with the weeds and gradually they have transformed into hatred that nobody could uproot. I buried our mother in the yard because I want her see you come back one day!” He shrugged his shoulders: “Ok, whatever you think. Tomorrow I will leave here, and we won’t see each other anymore. I am tired, you must serve me to sleep!” He pushed away the table and kicked off his shoes. The candle was blown out. His wife was left in the dark, motionless.

He woke up in the early morning. Through the window he could see the blue sky. The window paper was broken and flapping in the breeze! He sat up immediately. The house had completely changed from what he had seen last night: The roof was ruined, a large spider web occupied the corner; moss crawled allover a broken loom, where the fabric was covered with thick dust; next to him and half buried in the weeds was a skeleton. From the ragged fabric pieces that stuck to the skeleton, he recognized his wife’s gown, the exact one she was wearing last evening. 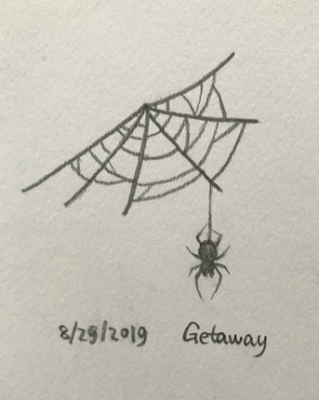 He cried out, flung open the door and ran into the yard. He wanted to leave this place right away. But in his haste, he stumbled over something: It was a tombstone with his mother’s name on it. He was so scared that he couldn’t stand up again. He crawled in the weeds, yelled for help and used his fists to hit the wall of the yard desperately. Then the wall fell down, he was buried underneath. 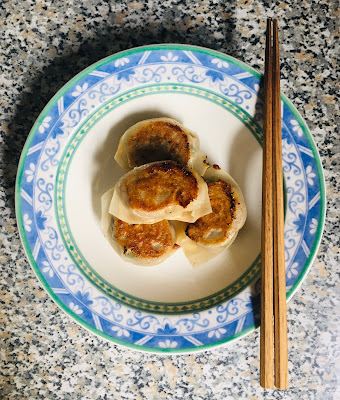